Church bells tolled at lunchtime today in Dunedin to herald the arrival of the season's first albatross after 10 months at sea. 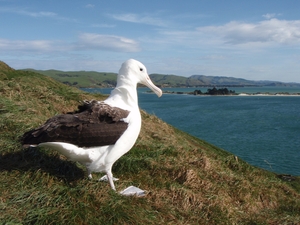 The albatross spends several years away feeding in South American waters before returning to Taiaroa Head to find a mate. Photo: Department of Conservation

The site at the tip of Otago Peninsula hosts the only mainland breeding area in the world for northeralbatross. They are the largest seabirds with a wingspan of over three metres.

The Department of Conservation says 24 albatross chicks were raised last season - the second best ever for the colony - and it hopes the birds will repeat this.