MetService says torrential rainfall in Northland, which is weathering its third bout of flooding in a month, should gradually ease tonight. 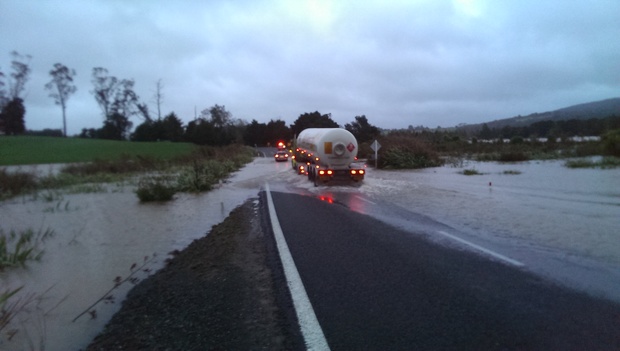 Duty forecaster, Hordur Thordarson said the worst was over for the Far North, where about 150 millimetres of rain has fallen in the last 24 hours, but the low is now travelling south.

He said further heavy rain was expected this evening but it should clear overnight.

Mr Thordarson said parts of eastern Northland could be hit with heavy downpours of up to 15 millimetres an hour tonight.

State Highway 10 at Kaeo is still impassable due to flood waters and will remain closed overnight.

Farmers near Kaeo have already had to to move stock to higher ground. Farmer Les Jackson said all the farms on the river flats are virtually cut off, and they are unable to get to town because Omaunu Road is under water.

He said it is the third time the region has been flooded in just one month.

"We've just got to accept what's coming. The stock's on the hills, we are feeding out hay and bailage to keep them fed on paddocks that have got very little grass on them, until the flats are accessible again."

Another farmer, Margaret Hayes, said she had lost some stock in a flash flood just last week, and the constant heavy downpour was concerning.

He said there had so far been no reports of significant damage as a result of the weather.

Power out on Saturday

Thousands of people were left without power yesterday, as the heavy rain and gale force winds buffeted the region.

A Northpower spokesperson, Steve MacMillan, said the outages largely affected parts of Kaipara and Whangarei. All power was restored this morning but crews remain on standby.

"We just urge caution for anyone around any electricity network to remain clear of downlines and just keep an eye out for the cause of any outages because it's pretty dangerous in these high wind situations."