Dunedin's name as a gothic, education city will get a whole new edge this weekend when it becomes the stage for the world's first zombie science festival.

Runners on the survival course Survival Run have to evade monsters. Photo: SUPPLIED / Am I Fit

The DunDead festival which starts tonight will combine horror movies and zombie dress-ups with sets of five-minute talks by academics reflecting on what it would be like if the dead really walked a mong us.

The un-dead zombie has exploded into popular culture as the ultimate scary monster, and it was only a matter of time before it got its own festival. 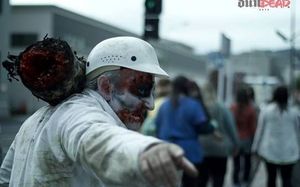 A zombie walk from Dunedin's railway station will lurch to the Town Hall. Photo: SUPPLIED

One of the organisers, designer Dallas Synnott-Chapman, says Dunedin has quickly embraced the idea.

They just think it's hilarious and fantastic and they can't believe that we've taken it as far as we have."

Fellow organiser, brain scientist Ann Cronin, said her aim was to separate fact from fiction with the talks by academics from areas like psychology, chemistry and neuroscience.

They will answer burning questions such as what fear smells like and practical ways to survive a zombie takeover.

"Zombies have breached that niche category in movies and TV now, they're mainstream - we even have romantic zombie films. They are the ultimate empty vessel for whatever we want to talk about or think about - we can pour all our ideas into them."

The festival won't just be happening indoors, but will feature a Zombie Survival Run through bush and a farm, in which runners will have to evade monsters threatening to pass on a deadly virus.

There's also a Zombie Ball and movie screenings. The climax is the premiere of a long-awaited feature film called I Survived a Zombie Holocaust, filmed around Dunedin four years ago with over 600 local extras.

A zombie walk from Dunedin's railway station will lurch to the Town Hall for a mass dance of the set piece from Michael Jackson's music video Thriller before the film's first screening. 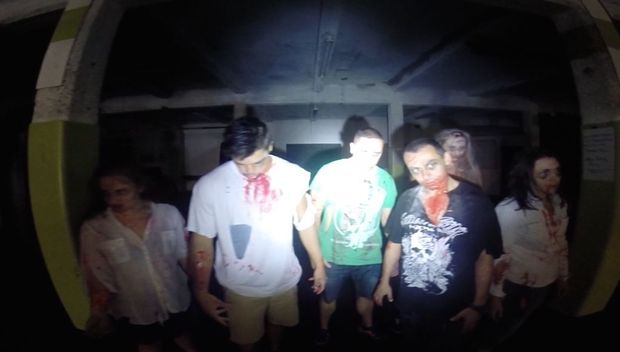 The festival combines horror movies and zombie dress-ups with talks from academics. Photo: SUPPLIED / Am I Fit