Police have laid 14 new charges against a 32-year-old man arrested after a car chase in the Bay of Plenty last month.

Donny Falakoa, from Auckland, is now facing 15 charges including assault with intent to rob, possessing a cannabis plant, theft of a car and failing to stop. 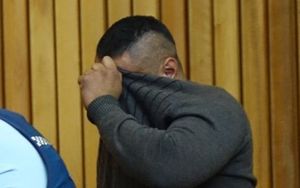 A charge of using a firearm against police, was entered when he appeared in court last month.

Police said the charges relate to a pursuit in Mt Maunganui where several members of the public were confronted by a man with a gun.

Mr Falakoa was remanded in custody by Tauranga District court on Monday and will re-appear on 25 September.

In Tauranga District court on Monday morning Mr Falakoa made an obscene gesture at journalists who were taking photos of him.