Three young people have been arrested in relation to a fire at Paraparaumu School on the Kapiti Coast. Four classrooms and the library burnt to the ground on Sunday night.

Police said on Monday afternoon that three people would appear at the Porirua Youth Court, but a date had not been set. Inquiries are continuing. 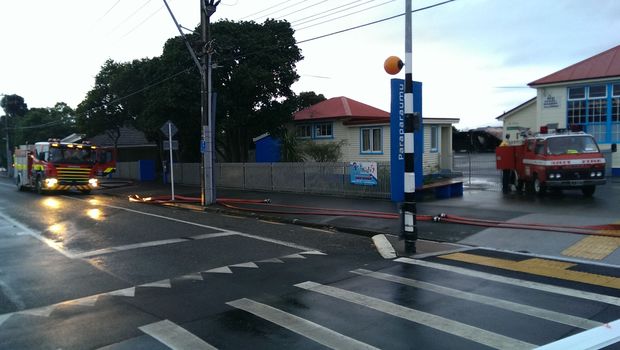 Police are treating the blaze at the wooden primary school as suspicious. Photo: RNZ / Michael Allan

At its height, 12 appliances and 40 firefighters from the Kapiti Coast were called in to deal with the blaze at the primary school in Ruapehu Street.

Staff, parents and children gathered on Monday morning to see the damage and some were in tears.

Former student Mark Hunt said it was a tragic sight. "Pretty devastated, actually. I'm the father of four daughters, so it really hits me hard and I live behind the school so I saw it all last night."

Ministry of Education officials are helping staff at the school, which is closed for the rest of the week.

Board of Trustees chair Vanessa Brougham said the fire is a tragedy, especially with the school celebrating its 125th anniversary this year. Staff now say that celebration is in doubt.

Ms Brougham said neighbouring schools have offered space to the school's 160 pupils until it can reopen.