A portable courtroom in an Oamaru carpark in place of a quake-risk court house is being described as an inappropriate blight on the town.

A prefab in an Oamaru carpark has replaced a historic court house considered a quake-risk. Photo: RNZ / Ian Telfer

The temporary courthouse, which came from Christchurch, opened with a brief ceremony today at the back of Oamaru's Brydone Hotel.

The National Party MP for Waitaki, Jacqui Dean, said the community deserved better, and she would only accept it as an interim solution.

Some people described it as a functional solution.

Others said it was a blight on the town.

Jacqui Dean said she would keep pressing for the 130-year old whitestone courthouse on the main street to be refurbished and reopened.

The Waitaki district mayor, Gary Kircher, said some people saw it as a step towards restoring a permanent court building.

The Courts Minister, Chester Borrows, said he wished the old courthouse could be used, but the transportable building was better than other temporary solutions. 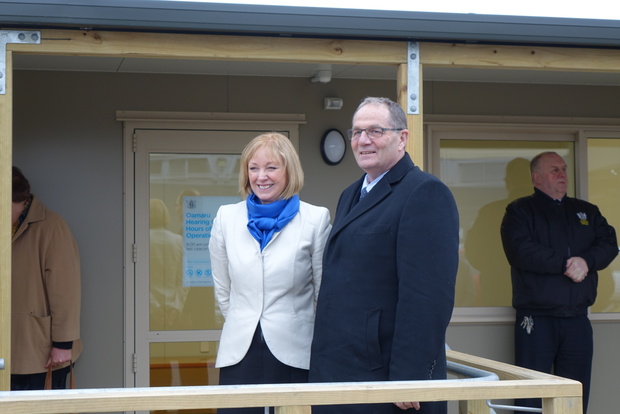 Courts minister Chester Borrows and Jacqui Dean at the opening of the prefab in an Oamaru carpark. Photo: RNZ / Ian Telfer