Air New Zealand says the pilot who allowed Transport Minister Gerry Brownlee to fly without a security clearance was wrong, but he will not be stood down.

Mr Brownlee said he and two of his staffers were running late for a flight on Thursday and were let through an exit-only door by an airport staff member, rather than through security.

The airline says it won't discipline the pilot, despite the error. 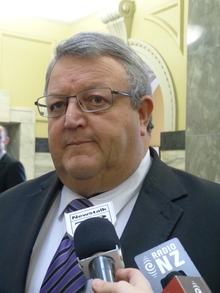 Air New Zealand's chief flight operations and safety officer David Morgan said in a statement that the pilot was advised by a senior aviation security (AVSEC) officer, who visited the cockpit prior to departure, that Mr Brownlee was on board and that he had not been security screened.

"However, the officer advised the pilot that AVSEC was happy to allow Mr Brownlee to travel and that he was not required to be screened.

"This was an error and the pilot should not have operated the flight with an unscreened passenger on board.

"Air New Zealand will co-operate fully with the CAA investigation into this matter, however, this is not a disciplinary matter and there is no justification to stand the pilot down. We are in the process of reminding staff of security screening requirements."

Mr Brownlee earlier said he offered his resignation as minister because he had put Air New Zealand staff and Christchurch Airport in a difficult position, and he is the minister responsible for aviation safety. Prime Minister John Key has refused to accept his resignation.

Mr Brownlee said he only became aware of the seriousness of the matter when later contacted by Aviation Security and, as Transport Minister, should have had a better understanding of the rules. He said he had apologised to those compromised by his actions.

The Airline Pilots Association says while Mr Brownlee's actions were wrong, he had had background security checks in the past, and clearly did not pose a threat to the plane.

However, the association's technical officer, Dave Reynolds, says people such as the pilot and the security worker who let the minister through need the power to prevent such incidents from recurring.

"It's very important that people who are in these positions know who's allowed access and who is not, and that there's a proper procedure whereby they can say 'just stand by just a moment - I have to check sir, or madam'."

Mr Reynolds said he hoped the Civil Aviation Authority would take steps to prevent a repeat of the incident.