A climber has been seriously injured on Mount Ruapehu after falling on ice and sliding 300 metres into a gully.

A police spokesperson said the 25-year-old man was in a small group attempting to climb Pinnacle Ridge, at Whakapapa, about 10.30am.

The Whakapapa Ski Patrol treated him for serious head injuries before he was taken to Waikato Hospital by the Westpac Rescue Helicopter. 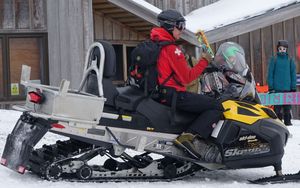 A member of the Ruapehu search and rescue squad. Photo: RNZ

At the same time, a search and rescue operation began for a woman from the same party, who became stuck on top of the Pinnacles.

Taupo's Greenlea Rescue Helicopter was used to get alpine rescuers to the area to help the 23-year-old.

On Wednesday, Australian soldier Sergeant Gary Francis died when he fell down a crevasse on Aoraki-Mount Cook.

Sergeant Francis died during a mountain and cold weather training activity. The 44-year-old was serving with the Sydney-based 2nd Commando Regiment.

He was with a party of 10 on a training exercise when he fell in the Grand Plateau area just before 12.30pm.