The cooling housing market is hitting the regions hard, with some areas reporting a 20 percent drop in the number of sales.

Queenstown is among three regions where the number of house sales fell in June in what the Real Estate Institute says is a market coming off the boil. 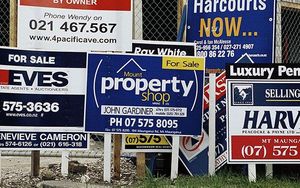 REINZ figures show 5763 houses sold in the month of June, down 12.3 percent nationwide from May and 6.1 percent from June last year.

However, Otago, Central Otago/Lakes and Taranaki all experienced drops of 19 to 20 percent.

As well, homes took on average 39 days to sell nationwide - five days longer than for the same month last year and almost back to the long-term historical average.

The institute's price index, which irons out fluctuations caused by more or fewer more expensive houses being sold, fell 0.3 percent in the latest month from May, although it is still 6.2 percent higher than in June last year.

Sales volumes in seasonally adjusted terms are 17 percent lower than before October last year, when the Reserve Bank imposed restrictions on banks lending to people with small deposits.

REINZ chief executive Helen O'Sullivan said rising interest rates and the likelihood of further rises were also weighing on the housing market. The figures appeared to be showing more than just a seasonal slowdown.

"Volumes are down from May, which we normally expect, but they're also down around about 6 percent nationally on this time last year. Three of our regions are down 20 percent on the same time last year, which is a really big drop for those regions."

Ms O'Sullivan says nationally, prices are falling and it's taking longer to sell a home.

"So for it to move back that way quite quickly, we're definitely seeing the boil come off the market."