Restrictions have been lifted at Auckland Airport, after fog caused significant disruption for travellers on Monday morning.

The company said 58 domestic flights had been cancelled and 35 delayed. 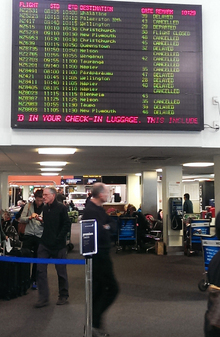 One international flight was delayed and two diverted. China Southern flight CZ335 was sent to Christchurch and a private aircraft from Melbourne had gone to Wellington, while a flight from Singapore was also been delayed.

MetService said there had been a lot of moisture around from recent bad weather, and it was still quite humid with light winds - a recipe for the thick blanket of fog that caused havoc at the airport. It said the forecast for later on Monday was clear.

A large number of disgruntled passengers were stranded with their plans in limbo. It not only disrupted business meetings, but school holiday plans.

Queues of businessmen, individuals and families have packed out the domestic terminal.

One mother, who was travelling with two young children, said their plans to go fishing at Nelson's Golden Bay might have to wait until Tuesday.

Another woman said she had just got back from Samoa and needed to get home to pack, as she was due to fly to Glasgow for the Commonwealth Games.