Christchurch Polytechnic is defending its decision to demolish a building dedicated to students killed in the World War I.

It has asked the Earthquake Recovery Authority to bring down the hall, dedicated to 71 students who died in the WWI, to make way for a $30 million engineering school.

But polytech spokesperson Darren Mitchell said the building had significant earthquake damage and had not been occupied since September 2011.

He said the Christchurch Returned Services Association (RSA) has been consulted and plaques and honours boards have been saved for a memorial garden.

Heritage advocates protested on Tuesday against the move to pull down the 80-year-old memorial hall.

Historic Places Aotearoa president Anna Crighton said this was yet another example of a building which was not unsafe but had to be demolished for new development. She also questioned the polytechnic's reasons for the decision.

"CERA have come out and said that they have received engineering advice which suggests that the building does not meet the dangerous building definition," she said.

"They also say that the decision was made without opposition from the Christchurch Memorial RSA (Returned Services Association)."

However, the RSA had not been fully informed about the status of the building, Ms Crighton said. 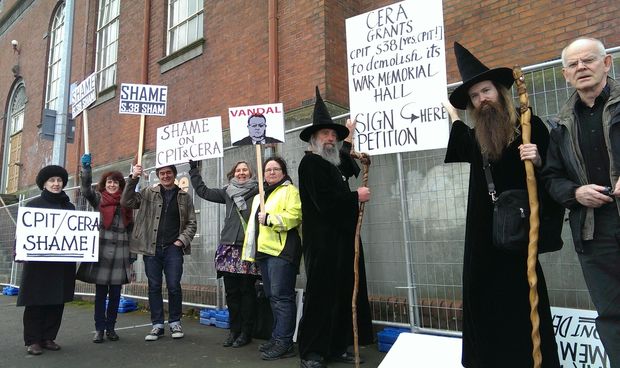 RSA national vice-president BJ Clark said the move was disappointing, and that more such buildings could be at risk under legislation before Parliament.

The Earthquake-prone Buildings Amendment Bill meant owners would have to pay to bring buildings up to the minimum building code within 15 years.

"I suppose it's over to the public and to the Government to weigh the risk against what those buildings or these memorials were actually raised for," Mr Clark said.

"If we just go and push a building over just because we think it's too hard, without considering the options, then that's very sad."