A Kaitaia woman says she knows she came close to death when a massive tree fell on her during the storm that has swept the upper North Island for two days. (AUDIO)

The storm that brought hurricane-force winds that snapped concrete power poles and felled massive trees from Cape Reinga to Kaiwaka is only slowly abating. MetService says the severe gales would ease overnight on Wednesday, but forecast rain could still cause floods and slips in already sodden areas.

If you witnessed the storm and would like to share pictures or video with us, please email it to: iwitness@radionz.co.nz 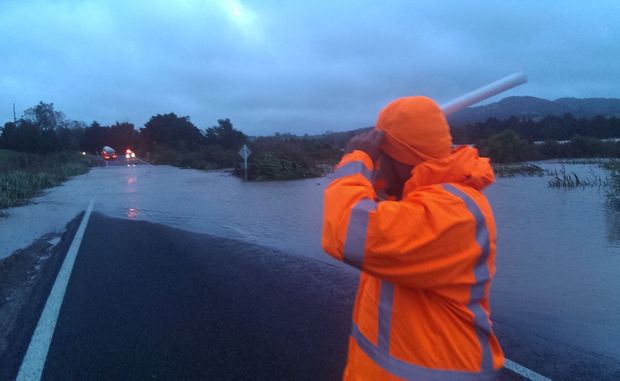 Ivy Crammond has spoken about her ordeal in which she was pinned in her armchair by a 40-metre-high macrocarpa that crashed into her Kaitaia home on Tuesday. She managed to get one arm free to call for help and the Fire Service had to use the jaws of life to free her.

Ms Crammond is recovering in Kaitaia Hospital and told Radio New Zealand's Checkpoint programme on Wednesday she'd had a feeling she should get out of the house when the wind suddenly picked up.

"And the next minute there was this mighty crack and crash, and down came the roof and everything on top of me. I wasn't really thinking, actually, I was just saying to myself, 'Oh bother I'm in a bit of a pickle here' - but I also knew I was very lucky to be alive." 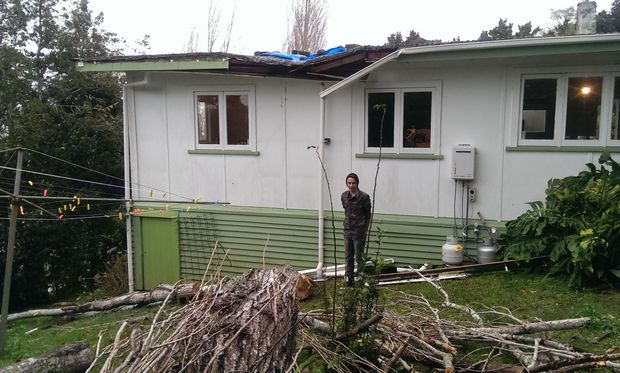 Power still out for thousands

The number of homes without power has been fluctuating. In Auckland on Wednesday night about 5500 are cut off, while some people at the top of Northland could be without power for one or even two more days.

Top Energy chief executive Russell Shaw said repair crews have been confronted with exceptional damage and are having to replace concrete poles and rebuild lines. He said people need to treat fallen lines as if they were live.

Northpower said entire rural communities from Maungaturoto to Matapouri were without electricity and, in some cases, phone services on Wednesday. Spokesperson Steve McMillan said even though the company has brought in crews from as far as Hamilton, it won't be possible to reconnect everyone before Friday at least.

The Fire Service said it was busy with wind-related incidents, with roofs lifted and trees down. A spokesperson said it fielded about 60 to 80 calls on Wednesday morning alone from all over Auckland, particularly in the north.

Baby born in back seat

Near Thames, a pregnant woman on her way to a hospital had to give birth in the back seat of her car after storm debris blocked the road.

Senior station officer Shane Bromley from the Thames Volunteer Fire Service said a fallen tree had pulled down two powerlines, preventing the car carrying the woman and her partner from getting through on Wednesday.

By the time fire officers got there, she had given birth to a girl. Mr Bromley said ambulance staff arrived shortly after and confirmed that the mother and child are both safe and well. Contractors have since cleared away the tree blocking the road.

On State Highway 11, south of Paihia, two drivers had to be rescued. Kawakawa fire officer Wayne Martin said the pair tried to get through flood waters 1.5 metres deep. 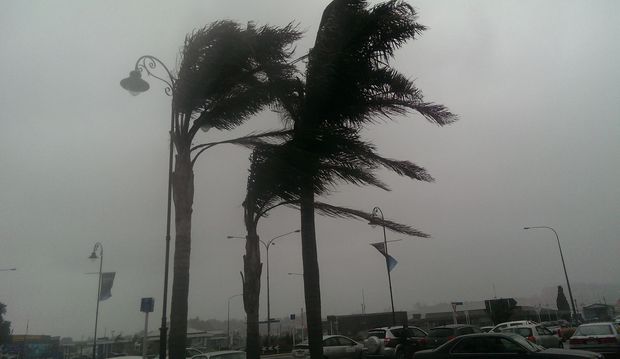 The storm has closed sections of the state highway network in Northland. Police are warning motorists to slow down, while the Transport Agency urged people to delay any travel if possible until conditions improve.

State Highway 1 at Hukerenui, north of Whangarei, is closed due to flooding as is State Highway 11 between Kawakawa and Paihia. State Highway 12 at Aranga near Dargaville has been closed by a fallen tree on Wednesday.

There were crashes six overnight on Tuesday - three involving trucks blown over by the powerful winds. Inspector Murray Hodson said drivers were failing to slow down in places where police patrol vehicles were operating flashing lights to warn of hazards.

Meanwhile, the Transport Agency has reduced the speed limit on the Auckland Harbour Bridge for a second day. Regional journey manager Jacqui Hori-Hoult said the limit has been lowered from 80k/h to 70km/h. Motorcyclists and people driving campervans should consider using State Highways 16 and 18 as a safer alternative.