A Kaitaia woman is lucky to be alive after a massive tree came crashing into her home, pinning her in a chair. It was felled by a storm battering the upper North Island which has cut power to thousands.

At least 13,000 homes are without power in Northland and nearly 10,000 in Auckland late on Tuesday night. 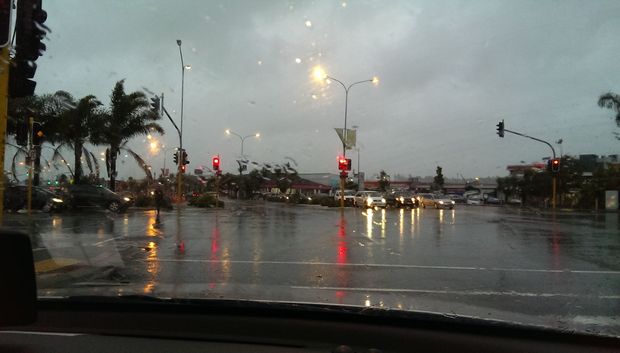 Kaitaia's deputy chief fire officer Craig Rogers said the woman aged in her 50s was sitting in an armchair and could have easily been killed had the tree fallen a metre the other way.

"About a 40-metre-high macrocarpa tree came straight down over the top of her house, straight through the middle and pinned her in her chair. We basically took awhile to find her. Lucky for her the phone, I think, was sitting right beside her, so she managed to ring for help.

"We used the jaws and a bit of other equipment and managed to lift the roof structure with parts of the tree."

Mr Rogers said the woman was taken to hospital with moderate injuries.

There have also been car accidents in the region and about a dozen roofs have been torn off homes and commercial buildings.

Civil Defence in Northland says emergency services are being kept very busy after powerful winds gusting up to 140km/h toppled trees and damaged power lines from Cape Reinga to Kaitaia.

The MetService said the weather system is very slow-moving and there are warnings that rain and winds will only get worse overnight for Northland, Auckland and into the Coromandel.

Police are warning people to stay off Northland roads on Tuesday night if possible.

Local Hadley Bratton told Radio New Zealand's Checkpoint programme the storm is worse than the remnants of Cyclone Lusi, which swept through in March this year.

Ms Bratton said the main road was closed three times as she drove from Awanui to Te Kao earlier on Tuesday, with long queues of logging trucks, buses and holiday traffic. She said it was very dangerous with falling trees and signs.

Gusts of more than 60km/h were recorded on the Auckland Harbour Bridge on Tuesday and the wind was expected to strengthen. The speed limit on the bridge has been lowered to 70, and motorcyclists and high-sided vehicles are advised to avoid using it.