The clean-up throughout a sodden North Canterbury is in full force, with council staff and contractors checking flood damage to assess what repairs are needed.

The Waimakariri District Council emergency operations centre was still operating on Wednesday and council community teams and volunteers were visiting homes in the worst-affected areas. 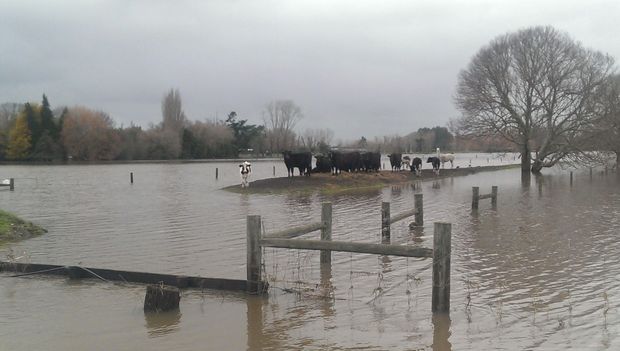 Cows at a property in Island Road, Kaiapoi. Photo: RNZ

Waimakariri district mayor David Ayers said the emergency centre had received between 300 and 400 calls for help since Monday night.

He said the council acted quickly to respond to Tuesday's flooding but admitted, in response to criticism from some residents, that more sand bags could have come sooner. Residents also said the council needed to address the flooding problems in the region.

"It's not a question of acting fast enough - we were out there before sun-up doing what we could," Mr Ayers said.

"The emergency operation centre was up and running very early. We're used to doing it. We've had windstorms, we've had earthquakes, of course."

Mr Ayers said a group of council staff had just been formed to address short, medium and long-term options to counter flooding and would present a report to the council in July.

Kaiapoi home owner Faye Boreham said she had about 20cm of water under her house, and her property was completely flooded. The water had also been right through her garage and made "one hell of a mess".

Ms Boreham said she spent the morning sweeping and cleaning debris including fruit, bark, wood and leaves from her property.

Meanwhile, State Highway 1 north of Christchurch has re-opened, but drivers are being urged to take extreme care between Christchurch and Picton, as the flooding is likely to have damaged the road.

Residents connected to the Oxford's Rural Number 2 water supply are being warned to boil their water until further notice. 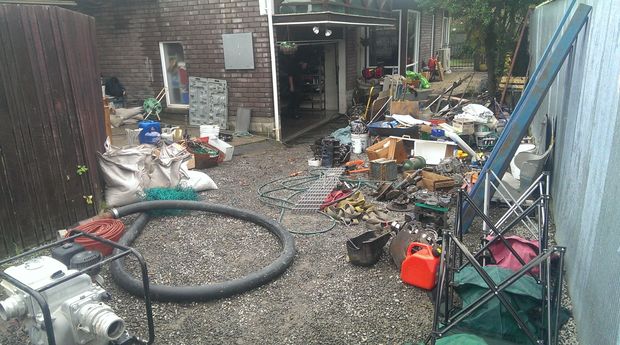 The clean-up at a Kaiapoi house. Photo: RNZ