Forestry workers are being urged to take part in a major safety review of their industry, after ten people died in accidents last year. 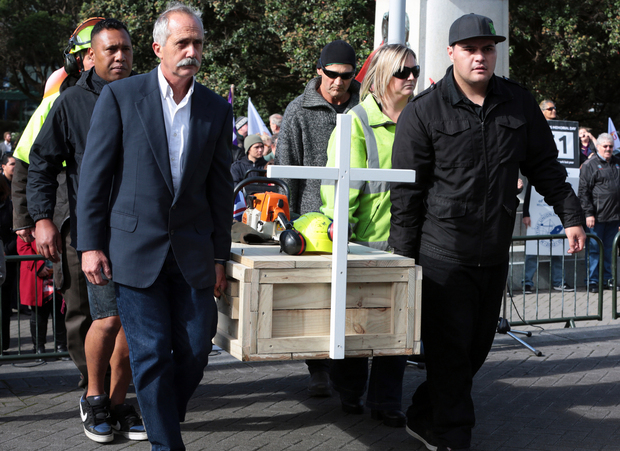 The Independent Forestry Safety Review panel, which was set up in February this year, and is conducting the review, launched an anonymous online survey on Friday.

The survey asks about the number of breaks workers get and about working in bad weather.

A panel member Mike Cosman said the country's 5000 or so forestry workers often work in remote places with little union representation and rarely got a chance to air their concerns.

As well as the survey, the panel will conduct public and private meetings in six regional centres during the next three weeks.

The review panel's report is due in August.

Early findings from the Independent Forestry Safety Review say it is clear there needs to be widespread change to stop injuries and save lives.

The Review panel has spent three months gathering information, including talking to families of some of the workers killed.

It said challenging and often harsh conditions are contributing to the rate of serious injuries and deaths. Over five years from 2008 to 2013, there have been 28 deaths and 967 serious injuries.

The panel points out that this is one death short of the Pike River mine death toll, and the injury rate in forestry is almost six times that of other sectors.

"Take training, for example. Today there are some recommendations around training, but there is no mandatory training.

"You can't be a gasfitter these days, you can't be a forklift driver without mandatory training. But you can operate in the most dangerous environment from a working prospective in the country."

Mr Adams said this must change.

Labour Minister Simon Bridges said the death and injury rate in the forestry industry has been too high for too long and the sector needs to own the problem.

"There's real problems there, and it's very important that forestry industries here show some ownership to achieve an enduring safety solution. The Government's got to be part of this - but we can't do it alone."

The First Union represents some workers and believes the final findings will have as much significance for forestry as reports into the Pike River disaster had on coal mining.

More than 4000 people work in the forestry sector, which is New Zealand's third-biggest export earner and brings in almost $4 billion a year.

Last year, almost half of the 164 forestry operators visited by inspectors were found not to be meeting their health and safety obligations.