The Recording Industry Association of America says it wants to freeze internet entrepreneur Kim Dotcom's assets because he profited from a business based on theft. 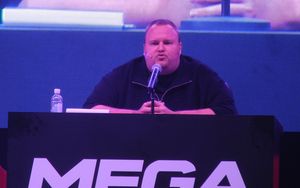 Kim Dotcom is facing similar action in the US. Photo: AAP

The Recording Industry Association said it is an important step in preserving assets that were unlawfully earned.

The recording companies' case and the Motion Picture Association's will be heard together in the High Court in Auckland next week.

Lawyers for Mr Dotcom's estranged wife Mona Dotcom were also in court on Wednesday, as she has an interest in the assets, as was a police representative.