The first day of the hearing into Jock Paget's case has been held in London with the New Zealand equestrian avoiding the media by entering the meeting at a back entrance. 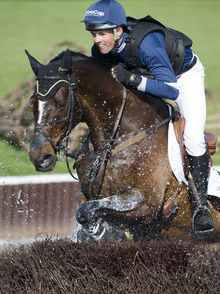 Jock Paget on Clifton Promise at the Badminton Horse Trials in May last year. Photo: AFP

Paget was suspended from competition after his horse Clifton Promise tested positive for the banned substance reserpine at Burghley Horse Trials in September last year.

Paget and Clifton Promise won the event, but were stripped of the title, which then went to New Zealander Andrew Nicholson.

Paget's former mentor Kevin McNab is also at the hearing after his horse also failed a drugs test.

Both horses are owned by Frances Stead of Clifton Eventers.

The hearing will decide if Paget and McNab are at fault for the banned substance being in the horses' systems. If found guilty, both could face a minimum two-year ban from the sport.

The tribunal was expected to last about two days, but a verdict may not be reached for a further four to six weeks