Auckland Transport has no plans to add subsidised services to Auckland Airport, despite complaints about high taxi fares.

Transport to the airport has been under the spotlight after complaints of unregulated taxi fares costing anything from $35 to more than $100 between the city centre and the airport at Mangere.

The main scheduled transport service is the Airport Express bus, which is owned by investment bankers Bancorp and charges $16 for an unsubsidised one way fare.

Craig Brownie, whose firm owns the Airport Express bus service, said the $16 one-way fare was about right for a route with 10-minute frequency and access to bus priority lanes.

"I think internationally it's more around the efficiency of moving people and the ease of getting on and off than what is the actual total price, because people will look at the alternatives to public transport as a total when they're thinking about price," Mr Brownie said.

The only subsidised public transport services are a bus-train combination via Manukau or Papatoetoe, and a more local service targetting airport workers.

Auckland Transport said as it revised the city's bus networks in the next year or so, there would be better connections to existing airport services but no new, direct routes were planned.

"It's really important that travellers have certainty of travel time. It doesn't necessarily need to be the fastest but as long as people know that they will get there when they need to to be able to checkin," Mr Spillane said.

The train, changing at Papatoetoe to the Airport 380 bus service, with a 10-minute wait for the connection, took an hour and cost $8.10 using an ATHOP electronic travel card. The journey on the Airport Express took 38 minutes, and cost $16. 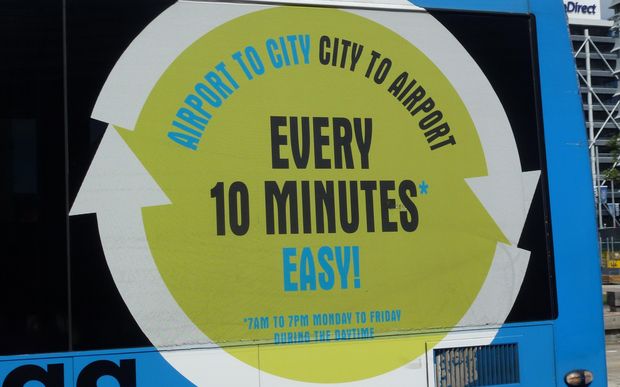