Canterbury Development Corporation chief executive Tom Hooper says the Christchurch rebuild is creating a new trend as New Zealanders who have been living abroad return for work opportunities on the rebuild.

Mr Hooper made the comments at an economic update on the region in Christchurch on Tuesday morning. 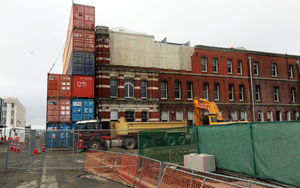 The rebuilding of Christchurch is driving the Canterbury economy. Photo: RNZ / Diego Opatowski

He said Canterbury is attracting a record number of migrants, including New Zealanders returning.

"It's reversing an existing and very long-established trend of Kiwis going away to work, and actually, them coming back into the rebuild is a huge positive."

But he said Christchurch could be at risk of overcooking its housing market, because of the short-term demand for homes.

In addressing the city's current housing shortage he said there is a long-term risk of building too many houses, which will create a problem in the future.

Mr Hooper said other problems may include the possibility of young people being drawn out of education into high-paying unskilled labour.