It might not be possible to deliver all the spending wanted by Auckland Maori, Auckland City Mayor Len Brown says. 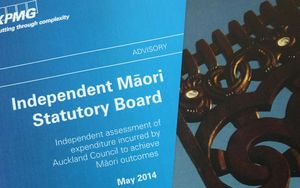 The Independent Maori Statutory Board on Thursday released a report by KPMG which showed Auckland Council spent only 25 percent of last year's $4 million budget for Maori outcomes.

The report signals a more assertive stance by the board, created by the legislation which amalgamated Auckland's eight councils in 2010, and whose members sit on most council committees.

Mr Brown and city councillors on Thursday accepted what Mr Brown described as an accounting report, while warning that Maori spending hopes had to be balanced against all others.

He said the analysis would help the council develop its next 10-year budget in the next 14 months.

"We also, through the 10-year planning discussion, I think will have a more useful discussion around what Maori outcomes are and how they need to be better reflected in our budgets."

Mr Brown said council spending which benefited Maori was bigger than what was shown in the report; significant spending around transport infrastructure has beneficial outcomes for everyone, including Maori.

As well, funding for education, events and youth programmes were sometimes more beneficial to Maori than others.

Mr Brown said improving the lot of Maori in Auckland was a key priority and would be better aligned to spending over the next 12 months.

Board member John Tamihere, who is also on the council's finance committee, said the report's findings were the most damning evidence in a long time of the treatment of Maori in the city.

Independent Maori Statutory Board chair David Taipari said it was pleased with the initial response to the report but that progress would need to made on all areas it covered.

"When doing all those things together, the results will come," Mr Taipari said. "I think doing one on its own won't be satisfactory."

Council staff will consider the report's findings and respond in a month.

Earlier, David Taipari said the council three years ago set spending for Maori outcomes far below where the board thought it should be - and then failed to spend most of it.

"The question is priorities. That's my question on behalf of the board to the council. Where is Maori in their priority list.

"Where I look at it now, it's on the bottom rung. That's a question council decision makers need to answer, where is it for them on their list, or is it where Maori have always been put - basically in second class."

Mr Taipari said previous work between the board and council identified priorities, and it was not clear why the money had not been able to be spent.

These included upgrading marae, which he said were community facilities, community housing on Maori land, and developing a significant annual maori event in Auckland.

The KPMG report proposed a plan of action running over the next year to get greater detail on council spending, review the current level of budgets, and lock those into the council's next 10-year Long Term Plan, which will be finalised next year.

The board and council have had a rocky relationship over the past three-and-a-half years, with the board early on planning court action to ensure the council met its funding obligations to the board's work.

A small group of councillors remain opposed to having board members sitting and voting on committees.

Mr Taipari said the KPMG report would form the platform for the future relationship between the board and the council.

"Until these funds and investments are realised, then the board will never have achieved its purpose. Success will be measured by the spend and investment in annual plans for the next 20 years."