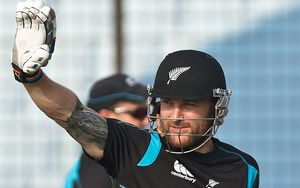 British newspaper the Daily Mail is reporting that McCullum told ICC investigators he was offered $200,000 to fix matches by a former international player in 2008.

The paper quotes McCullum as saying his "hero" tried to bribe him in a Worcester cafe during New Zealand's tour. He was told that all the big boys in international cricket were doing it and also how he could hide the money trail.

The Mail says the player is the same one who former Black Cap Lou Vincent reportedly told investigators he was involved in match-fixing with.

New Zealand Cricket chief executive David White said on Monday that McCullum is not under investigation from the ICC and has been applauded for reporting the approach.

Mr White said NZC needs an explanation from the ICC about how this information has come out.

Mr White said he doesn't know how long the investigation will take.