A neighbour of a man found with life-threatening injuries after a home invasion on Sunday says there was blood throughout the house. 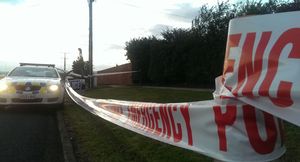 The police cordon at the house in Tuakau. Photo: RNZ / Kim Baker Wilson

The injured man, who is 36, is in intensive care in Middlemore hospital in Auckland with stab wounds and a head injury. He is in a stable condition.

He was at home in Tuakau in north Waikato when he was attacked.

Police said he was found by a family member about midday.

A man living across the road, who did not want to be named, said someone from the house came over and asked for his phone to call an ambulance.

He said he then went over to try to help, but the injuries to the man's face were severe.