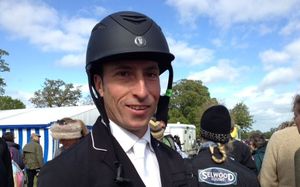 Price, riding Ringwood Skyboy, was second after a dramatic cross country phase, but he dropped four rails and incurred three time penalties in the showjumping to drop to 9th place.

Lucy Jackson had two rails and four time faults to finish 11th, while Sir Mark Todd had a total of 10 penalties but still climbed two spots to 14th.

Griffiths, back in 25th after Friday's dressage, had just one fence down.