The former driving range at the Nelson Golf Club has been transformed into a military camp as 60 Air Force trainees take part in an annual operation.

The students are involved in Operation Wiseowl, an annual pilot training programme in which they practise low level and formation flying, along with aerobatics. 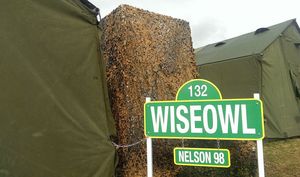 Flight Lieutenant Simon Isemonger said it was the first time the trainees have been off their base at Ohakea and it's a good test.

"Dealing with what comes with tented living and being in rougher conditions, we are, I suppose, just testing their mettle, seeing if they have the goods and can still deliver flying wise, while living in some form of hardship."

Flight Lieutenant Isemonger said the tented city would be opened to the public on Saturday.