The Auckland Council may sell QE2 Square at the bottom of Queen Street as part of an early start to constructing the downtown rail tunnel.

The square could become part of a commercial deal involving the council and a property developer under whose buildings the tunnel would run.

QE2 Square is bordered on one side by buildings owned by Precinct Properties, and is opposite the Britomart Train Station. 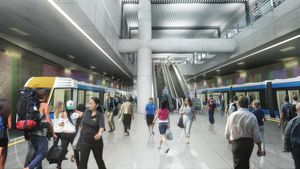 Precinct wants to redevelop the area, and it's been proposed that the section of rail tunnel under the area would be built at the same time.

Auckland Council said only that negotiations continue, any change to the square would follow consultation, and the matter would be discussed publicly by a committee next week.

The company's decision to buy the Downtown Shopping centre adjacent to the square has already saved the Council up to $100 million.

The council would have had to buy the property from its previous owner in order to build the tunnel, and then resell the site afterwards.

However, Precinct last year announced it would negotiate with the council on a deal to build the section of tunnel under its site as part of the re-development.