A man who complained about a police road block in Christchurch that trapped about 250 young people for more than six hours said he doesn't believe the police are genuinely sorry for their actions.

The apology follows an Independent Police Conduct Authority ruling they acted unlawfully and in a disrespectful and degrading manner towards the drivers and their passengers, who were forced to wait in their cars while safety checks were carried out.

The road block in an industrial area of the suburb of Bromley in 2012 was in response to the gathering of so-called boy racers to raise money for the Canterbury earthquake appeal.

Dan Cossar said it was a peaceful gathering ahead of a planned drive into the centre of town but quickly turned nasty when about 35 police turned up, some in riot gear.

Mr Cossar said people were abused and forced to wait in their cars, some until 2am the next day.

He said the group, including a pregnant woman, was prevented from leaving their cars, even to go the the toilet.

Mr Cossar said he did not believe the police apology is genuine and said police intimidation of boy racers is common.

No-one from the police was willing to be interviewed for this story. 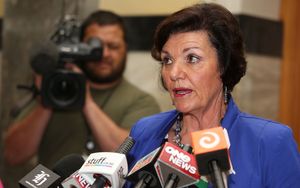 Ms Tolley said boy racers were difficult to police due to the fact they gathered in large groups that were hard to control.

She maintained new legislation cracking down on boy racers was working.

Civil libertarian Peter Williams QC said a new approach was needed to deal with boy racers that involved working alongside them and giving them a place to meet.

Mr Williams said photos of the police minister standing on top of crushed cars did nothing to help the situation and what was needed was some sort of compromise.

In a written statement the Acting District Commander, Superintendent Andy McGregor, said since the operation the police had introduced new procedures for dealing with anti-social road users and the same problems were unlikely to occur again.