A drug researcher is challenging the idea that synthetic cannabis and party pills will be pushed into the black market.

Legislation forbidding the sale of the substances came into force at midnight on Wednesday. From then it became an offence to sell, supply or possess the substances. 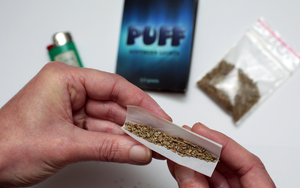 With synthetic highs off the shelves concern has been growing users may turn to the black market or make their own drugs to get a kick. The products may be unsafe and have unknown side effects.

However a scientist who carried out a study on party pills said his research into the 2008 ban of the drug BZP showed the law change was effective.

Chris Wilkins from Massey University in Auckland said the notion that prohibition is never successful is a myth. "In this case it seems to be actually fairly effective and there's been studies overseas that have essentially found the same things."

Dr Wilkins said only a third of the people who used BZP before the ban used it afterwards, and overall usage of the drug has tailed off considerably since then and he expected a similar trend with the latest ban.

However a synthetic cannabis user in Napier said the newly-banned drug is already being sold illegally on the street.

Dion Hohepa said he regularly has withdrawal symptoms and is worried about the drug not being available.

He said he would probably go back to using cannabis and methamphetamine but that is much more expensive and means money going to gangs.

Mr Hohepa said many desperate users will pay the hugely inflated prices that sellers will ask for synthetic cannabis.

Synthetic cannabis begins as an almost potpourri of dried aromatic plants and a chemical is sprayed on the dried leaves.

Scott Palmer from Puffing Stuff in the Auckland suburb of Papakura said buying synthetic cannabis from other sources won't be safe.

"The illegal trade is now going to be palming off what people will think is synthetic cannabis, what they've previously been able to have and use safely and know what the side effects are going to be. It could be any sort of chemical sprayed over any sort of plant matter and no sort of control over it whatsoever."

One woman said others would go online to buy the products where people make the drugs themselves.

"It is not as safe as when you know it is coming from a shop ... a total stranger is making it."

The Drug Foundation said users who turned to the black market would be putting themselves at risk as they would not know what they are buying or what the effects might be.

"There is no requirement to have an age restriction or list the ingredients or refer people to the Poisions Centre if they get into trouble, " said foundation executive director Ross Bell.

"Under the old law, the government had a lot of control over the market but under this new law, where all these products have been removed from the shelves and shifted to the black market, the government has zero control."

Mr Bell said chemists are constantly developing new chemicals to make synthetic highs and anyone is able to go online and get them delivered to their door.

And he said the chemical was very potent. "On some websites, for US$20 you can get an amount of the chemical which is enough for about 500 hits."

Mr Bell said it is hard for customs to detect such small amounts coming into the country and drug sniffing dogs are often trained to pick up more known drugs, such as marijuana and methamphetaphine, and not these new chemicals.

A toxicologist from the National Poisons Centre, Leo Schep, said people should not buy or use something when they do not know what is contains.

"Our advice would be to not to buy any alternate products that people may try to flog off to them."

Mr Schep said users should talk to their doctors or support services to get help with their addiction.

The Ministry of Health estimates about 3.5 million packets of legal highs were sold since the Psychoactive Substances Act came into force last July, with an approximate retail value of $70 million.

The police will be visiting all shops on Thursday to make sure all the now illegal highs are off the shelves.