The InterIslander ferry, Aratere, is expected to be back in service by the end of June.

The ship was taken out of service after a propellor came off in Cook Strait on 5 November last year. 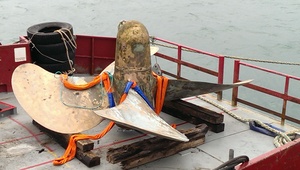 The six-tonne propellor was recovered from the sea floor in December. Photo: RNZ

Just before its relaunch this week, cracks were discovered in the shafts that turn its rudders.

InterIslander says the ferry, which went to Singapore for the repairs, should be ready for a sea trial in a fortnight.

The return journey to New Zealand is likely to take two weeks.