Work is continuing to run smoothly at Lyttelton Port, despite the start of strike action, chief executive Peter Davie says. 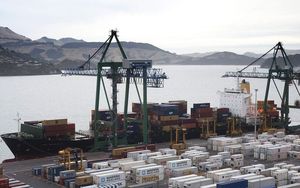 Eleven logistics officers, who oversee the loading and unloading of trucks, trains and ships, have not worked overnight shifts since Friday, when negotiations for a payrise of 4 percent stalled.

Mr Davie said the company was not expecting delays, and there had been no disruptions.

The company would speak with workers if they came to the table with a reasonable offer, he said. However, he did not believe 4 percent was reasonable.

However, Rail and Maritime Union branch president Andy Kelly said it was small change for a business which made a $17 million profit in the past financial year.

Rail and Maritime Union organiser John Kerr said the nature of the action means the pressure would build up gradually.

A mediation meeting will be held on Wednesday.