Some of the fed-up Christchurch residents who met with city council representatives in flood-hit areas on Saturday continue to call for red-zoning. 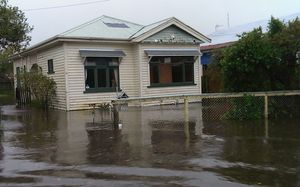 Council staff and Red Cross volunteers door-knocked 150 households in the Flockton Basin area, to get urgent information for a mayoral taskforce on flooding.

Residents were canvassed on six temporary solutions to ease flood risk, including building stop banks, installing pumps, lifting houses and even coating some in a plastic membrane.

One resident, Paula, who lives on Squire Street, said they can't wait any longer.

And Vicky Walsh, who was forced to move with her family from their home in Thornton Street nine weeks ago because of flooding, said that after a repeat last week they want to get out.

She wants the property red-zoned because she can't keep moving her family every time it floods.

The family is living temporarily in Ohoka, 30 minutes from the city.

The staff collating data collected on Saturday have four days to get a full report to the city council, outlining resident's prefernces for short term flood protection.

After more flooding in late Arpil, mayor Lianne Dalziel demanded that short-term solutions be presented to the flooding to the full council by next Wednesday.