Executives at many of the nation's dairy companies waited on tenterhooks on Thursday for Chinese officials to release a list of authorised exporters of infant formula. 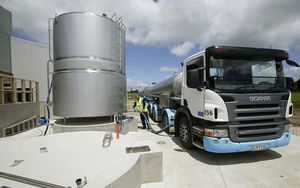 Keith Woodford, professor of agribusiness at Lincoln University, said it was likely that nine out of 10 infant formula companies would fail to make the list of approved exporters to China.

Professor Woodford said it was "game over" for most exporters who did not also manufacture the formulas themselves.

This was because they could not guarantee the sort of food safety traceability that Beijing is now demanding, unless the brand owner also controlled the manufacturing process.

He said the most affected exporters would be small businesses, and just could not meet the rigorous new demands.

Professor Woodford said China had cut its own milk formula manufacturers from more than 100 companies to just six, and it would be naive to think it woould not be just as tough on foreign companies.

Numerous executives told Radio New Zealand they were holding their breath to see whether they would be given the green light.

And the immediate trading future for 12 of New Zealand's infant formula manufacturers that failed a Chinese audit in March was also unclear.

The New Zealand Government sent a representative to Beijing to support the manufacturers and to argue they had made the changes to their systems required by the Chinese.

It also promised more than 50 New Zealand companies that own formula brands in the Chinese market that it would do what it could to try and ensure they survived.