The final grants from an international appeal for re-building quake-damaged Christchurch are rolling out to a broad series of organisations, for projects as varied as a school pool, a BMX bike club and a music school.

The Christchurch Earthquake Appeal has so far raised $100 million, and the latest $8 million grant given to 20 community groups is providing a welcome boost to residents. 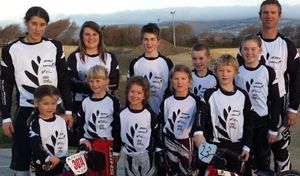 Members of the North Avon Christchurch BMX Club in front of the damaged track they will re-build with a $456,000 grant from the appeal. Photo: SUPPLIED

West Spreydon School trustees chairperson Duane Major says the old school pool had been fending-off closure in the years before the quakes.

It had only just been repaired when it was damaged in the February 2011 earthquake.

He says the school had a party to celebrate the re-opening of the pool and then - five days later - it was destroyed.

"People reckon it emptied in two hours, so it really got a big thump from that 22 February earthquake," he says.

The school hopes that with the $200,000 grant the pool will be ready this summer for school swimming lessons and for families to use during the holidays.

The Christchurch School of Music's building has been granted up to $100,000 to go toward a new home for the nearly 60-year old institution, where currently 700 Christchurch musicians have their lessons.

Its musical director, Celia Stewart says it is now holding lessons in classrooms at a local high school and its administration is run out of a warehouse in a neighbouring suburb, so it is now able to look at future options for accommodation.

"We may collaborate with the school, we may look for land in the vicinity, we have been looking at red zone houses and possibly moving those on" .

North Avon Christchurch BMX Club president Nigel Mahan says it's been granted the full $456,000 it will need for repairs to its damaged facilities.

"Water, power and toilets are gone and the land continues to move, so we are packing up and starting again".

The trust is not taking anymore requests from community groups for funding and the work of the Advisory Board has officially ended.

The Department of Internal Affairs will continue to monitor and administer the grants for the 10-year life time of the trust.