Ashley Hollings is a busy woman; not only does she look after her two children full time she has also set up a foodbank in her west Auckland home.

She began in August last year, listing the foodbank on a Pay It Forward page on Facebook and offering a few grocery items from her Massey home. In the eight months since, she has given food to more than 100 people. 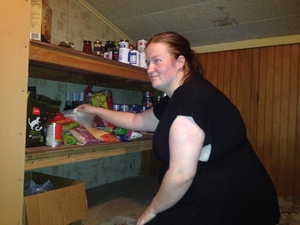 Ashley Hollings in the foodbank she has created in her home in Massey, west Auckland. Photo: RNZ / Natalie Mankelow

Mrs Hollings said she was so overwhelmed by needy people, including one who had not eaten in three days, she started making food parcels from donated goods.

"People won't necessarily come to me and ask for help. If I see that they're in need I'll just message them privately and say 'we do this - would you like some help?'."

She also finds most of the people who need help on the Pay it Forward page, where people do good deeds.

"Someone will say 'I need to go and find a loan shark or someone to lend me money to buy some food, and that's where we step in, because we don't want people to be in that situation."

She said the foodbank is for people who can't get help from Work and Income or other agencies.

"A lot of the Work and Income processes that are in place don't allow for excess bills, high bills ... I know how hard it is not to have a lot and when you don't have a lot and there's no-one to turn to."

Louise Martin, a solo mother of three special needs children, received one of the food parcels in December last year.

I did not put my hand up and ask for help. I'm not one to do that - I don't like to. I had ended up with a significant bill for repairs for my car - it failed a warrant and it failed it spectacularly - and I had to try and come up with $1400."

"It was very, very hard going over a few months."

Then, just before Christmas, there was a knock on the door and Ashley Hollings was there with boxes of food.

Ms Martin said she had been put off dealing with Work and Income and having the offer of food rather than having to go and beg for it was a really big deal.

She has paid back the food parcel by holding a free garage sale because, she said, that's the Pay it Forward way.

Mrs Hollings relies on donations from people on the Pay it Forward site and asks for items when she is running low. She said there is a huge need for food and other grocery items in her area.