A New Zealand charity has raised more than $13,000 so far to help the families of Sherpas killed in last week's avalanche. 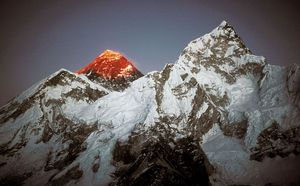 Sixteen Sherpas died in the tragedy on an ice field on 18 April.

Himalayan Trust chariman Michael Gill, who was in Nepal at the time, said the trust may pool money from the appeal with funds raised in Australia and the United States to help the dead men's families and make the mountain safer.

It was the first major avalanche of the 2014 climbing season. The previous worst toll occurred in May 1996 when eight people died in two days during a storm.

Nearly 250 people have died on Everest.