A faster-growing economy is continuing to keep New Zealanders home and attract foreigners. 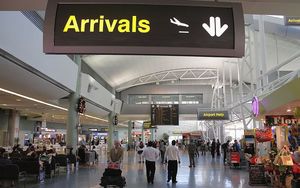 New Zealand had a net gain of more than 3800 people in March. Photo: PHOTO NZ

Thanks to a robust economy, more New Zealanders are choosing to stay home. The monthly number seeking work in Australia fell to its lowest level since the series began in 1996.

The economy is also luring more New Zealanders to return from Australia and attracting foreigners from Britain, China and India.

On an annual basis, there's been a net gain of 31,914, the highest level in more than ten years. New Zealand lost just a net 400 permanent residents to Australia in March, the lowest ever.

He believes there will be pressure on the Auckland house market, where most foreigners choose to live.

Mr Steel says the trend of rising migration shows no sign of slowing. "We'd expect them to remain firm ... compared to Australia the New Zealand labour market looks quite strong. I think that has something to do with the flows across the ditch stemming to quite close to zero in the month - which is saying something, given it was many thousands not too long ago."

Analysts expect annual net migration to peak at about 40,000 in the second half of this year.

Separately, the number of visitors to New Zealand fell 6 percent last month compared with the same period a year ago.

Statistics New Zealand says the change is due to Easter and school holidays in key countries like Australia falling later in this year.