Tens of thousands of tourists will need to be processed in a tent at Queenstown International Airport this winter as the resort prepares for its busiest ski season in history.

More than 50 international flights a week will land at the airport, a 25 percent leap on trans-Tasman arrivals last winter. 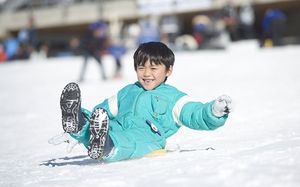 The Remarkables skifield is being upgraded. Photo: PHOTO NZ

Air New Zealand is boosting domestic capacity by 11 percent and Jetstar is adding an extra 15,000 seats between Australia and Queenstown for the winter season.

From August regular travellers will start to see construction on the new $10 million international terminal scheduled to open for winter next year.

Until then, airport chief executive Scott Paterson said, a heated marquee will be used to house a baggage reclaim belt.

Multi-million dollar infrastructure upgrades are being rolled out in preparation for the new season.

Remarkables skifield operator NZ Ski is spending $40 million upgrading the site. Work has begun sealing the road, a new chairlift is almost complete and chief executive Paul Anderson said the foundation work for a new base building will also be done before the winter.

But it's the police who have the task of sorting out tourists who take the partying one step too far.

Queenstown acting sub-area commander Steven Watt said a new national strategy has freed up front line officers to walk the beat, which puts police in a better position to deal with an influx of numbers.