The mother of a teenager who died after a school fight last year has been discharged without conviction for shooting her husband with an air rifle.

Brent Dudley spent days in hospital after Mona Dudley accidentally shot him once in the chest in December. 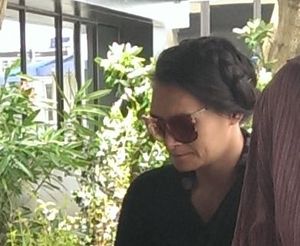 The pair's son, Stephen Dudley, died in hospital after a fight that followed a school rugby practice last June.

At a hearing at Waitakere District Court on Thursday, Judge John Bergseng said the shooting happened during an argument, when Mr Dudley gave his .22 calibre air rifle to his wife and told her to shoot him.

The rifle was passed back and forth between the pair before it discharged accidentally.

Judge Bergseng said the death of their son had put the couple's relationship under significant strain.

He said convicting Mrs Dudley would have a disproportionate effect on her, her husband and their four surviving children.

Mrs Dudley wept in the dock during the judge's remarks.

Outside the court she and Mr Dudley said they were incredibly relieved and the discharge would let them re-build their family.