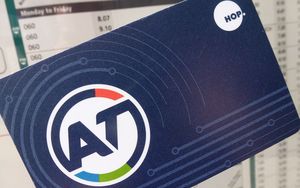 Auckland Transport says fewer than 3 percent of those penalised have noticed their error and been given refunds since the card was first used 16 months ago.

Figures obtained by Radio New Zealand News show $1,070,326 has been paid in penalty fares in almost 405,000 instances of failing to correctly "tag-on" at the start of a journey or failing to "tag-off" at the end.

Auckland Transport says of nearly 250,000 active users of the AT HOP card, 55 percent have registered their card. The remaining 45 percent of unregistered users have no access to transaction records and wouldn't know if they have been penalised.

The agency's chief operations officer, Greg Edmonds, says the failure rate by users amounts to only 3 percent of transactions and is considered low for a system handling about $1 million of transactions on an average business day.

Mr Edmonds says compared with overseas systems, the number of users who have registered their cards and can monitor their useage is high.

He says the tagging mistakes have risen and fallen as new services and new groups of commuters have joined the AT HOP system progressively over the past 16 months.

For any missed tag, AT HOP charges the card holder the maximum fare for the route being travelled - regardless of the actual length of journey taken by the passenger. The penalty is passed on to the operator of the service on which it occurred.

All public transport services in Auckland now use the electronic ticketing system, which has a total set-up and operation cost of $100 million.

Auckland Transport says it expects the failure rate to remain around 3 percent and it can do little more than continue to remind passengers about the need to tag on and off.

The figures obtained by Radio New Zealand from Auckland Transport show the main stumbling block is passengers failing to tag-off at the end of their journeys. Eighty percent of the missed taggings were when passengers ended their trip.

In addition to the penalty fares, a further $97,000 of passengers' money has been frozen after money was loaded onto cards, but the card was not used within 60 days.

Auckland Transport says frozen funds can be released if a card holder applies, but Mr Edmonds says he assumes money unclaimed after 60 days has probably been abandoned.

Auckland Transport denies the reloadable Hop card system is a money-making device. Greg Edmonds says penalties are made up of the fares that users would have paid, and customers can get refunds if they're registered.

Because nearly half the card's users have not registered, there's no personalised record of their transactions.

An Auckland parent says bus driver errors mean schoolchildren using AT Hop cards are being fined twice in one journey, and the problem has been going on for months.

Gretchen Goldwater says her children have been using the cards correctly to get to and from schoo,l but several times in the past few months they've been charged twice for the entire route.

Ms Goldwater says when she contacted Auckland Transport it said the drivers may be to blame, resetting the system once the children are on the bus, which invalidates their tagging on. She says the mistakes are frustrating and claiming back fares takes a long time.

Auckland Transport says there have been issues but most drivers have picked up the new system very quickly. Greg Edmonds says they're in the final stages of the complex system roll-out, which involves training about 2500 bus drivers.