WorkSafe New Zealand says 11 out of 23 log-hauling operations closed down because workers were in imminent danger are yet to reopen and the high rate of non-compliance with safety standards is alarming. 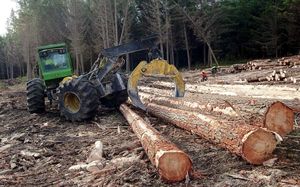 WorkSafe has completed its assessment of one of the two most dangerous jobs in the industry - hauling cut logs to transport sites in the forest.

More than 200 forestry cable-hauling operations were assessed and about 270 enforcement notices have been issued.

The regulator said 11 still have prohibition notices in place and there is ongoing work happening between operators and its inspectors. It said the notices would remain in place until inspectors are satisfied the work environment is safe and will stay that way.

Preliminary figures for 2013 reveal there were a record 10 deaths and more than 150 injures. In January this year, another worker died after being struck by a falling log.

"The biggest issue was that we had men on the hill in unsafe positions when logs were being hauled, and also that when our inspectors were talking to crews that there was a lack of knowledge at times about the safe retreat policy that they needed to have and actually what that looked like on the hill."

The Council of Trade Union said on Thursday the figures are alarming and called for urgent action to be taken. President Helen Kelly said while it is good that the Ministry of Business, Innovation and Employment is undertaking the assessments, it is only focusing on a small part of the problem.

"We're completely alarmed. We think that what's going on here is a systematic, dangerous practice across the whole industry. We think the structure needs changing and the industry needs to be regulated - and urgently."

Ms Kelly said the present safety system only operates at a shallow level, and when someone makes a mistake they get hurt because there is no back-up system.

WorkSafe New Zealand is about to begin a new round of visits to forestry contractors this week focusing on the other most dangerous job in the industry - tree felling.

An independent forestry review is set to report its findings on safety in the last quarter of this year.