Civil Defence staff are checking properties at a North Canterbury town struck by a tornado.

The clean-up is continuing in and around Amberley where at least two houses lost their roofs and farm sheds were damaged on Sunday.

Contractors have been working to restore electricity to the 100 homes and businesses cut off by the violent weather in the Amberley and Leithfield areas and about 10 did not have power on Monday night. 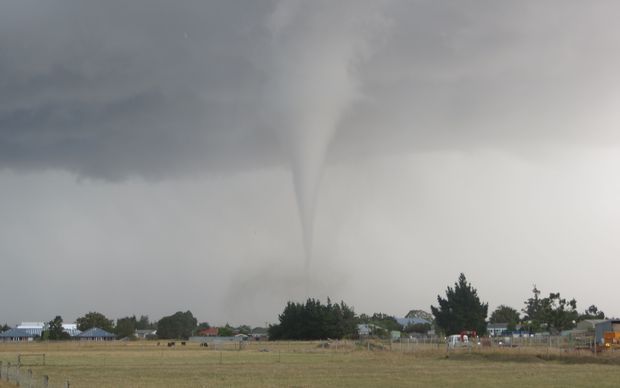 Staff from lines company Mainpower spent much of the day working to restore damaged power lines damaged. A spokesperson said all the main lines have been reconnected and there are a few smaller lines that need more work. One or two properties will be without power overnight.

Amberley resident Donna Graham told Radio New Zealand's Morning Report programme that she and her husband were terrified as the twister began to emerge from hanging black clouds. 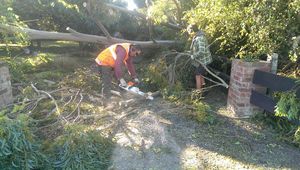 "I went outside to tell my husband I think one's forming, came back in, and it was a massive thing coming straight towards, she said."

"I realised it was coming straight towards our house, because our house was getting covered in flicked up leaves and bits of stuff, so we got really panicky and ran into the washhouse and got down on the floor.

"My husband is a really calm person but I could see he was the same way and we just waited and I had my fingers in my ears, the noise was tremendous.

"Then, when we realised it wasn't quite as noisy and the house was still there, we came out, and there was just debris of mostly trees, leaves stuck all over the house and massive blocks of ice just pounding the house." 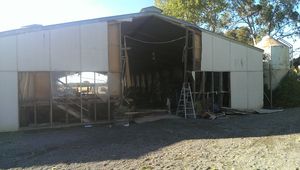 Donna Graham said the power was cut and the phone went out. She and her husband drove to friends and watched the tornado move over the hills, trailing dust along with it.

As the storm tracked out to sea it hit power lines and caused more damage, though minor, to properties on Double Corner Road near the North Canterbury town.

Civil Defence inspector Kerry Walsh said the damage was worse than he had had expected but the clean-up was progressing well.

Lines company Mainpower said some power poles had to be replaced and high voltage lines needed to be reconnected before supply could be restored to all customers. A spokesperson said this may take the rest of Monday.

Fire Service southern shift spokesperson Andrew Norris told Morning Report there were reports of a tornado near Leeston, and there were multiple lightning strikes at Lincoln.

"Those lightning strikes caused two fires; one in the Halswell Quarry on the south side of Christchurch that was dealt with by crews very simply, and another one out at Little River where we had a very large tree that was struck by lightning in the middle of a forest."

Mr Norris said neither crews nor a helicopter brought in later were able to put out the fire, so Department of Conservation staff were to fell the tree on Monday morning to fully extinguish the fire.