Auckland Mayor Len Brown is to pay $40,000 towards the quarter million dollar cost of an audit which followed his two-year-long affair. 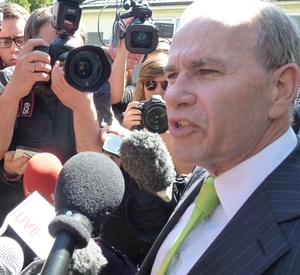 The mayor's contribution has been settled after negotiation with a group of senior councillors.

The Auckland Council says the review by auditors E Y and legal work has cost $250,000, which is more than twice what was expected.

In a two-line statement on Friday, Len Brown said he agreed to the payment out of respect to his fellow councillors and to acknowledge the upset this issue has caused.

The audit looked at whether ratepayers money was used, or whether the mayor abused his powers, during a two-year extra-marital affair which he admitted after re-election in October last year.

E Y found no innapropriate spending, but that Mr Brown should have declared as gift nine free hotel rooms and 64 upgrades valued at $39,000.

In December, Mr Brown said he had forgotten to declare the hotel rooms, and that he had been wrong in previously saying he had not taken any gifts of free rooms. The affair and the findings of the review prompted calls for his resignation.

Auckland Councillor Christine Fletcher was one of five politicians who negotiated with Len Brown over his contribution and says that the process was unprecedented and challenging.

"I can tell you as one of those who had been involved in the negotiations this was the best that could be negotiated on behalf of the ratepayers of Auckland and the circumstances that we found ourselves in."

Another councillor, Dick Quax, told told Radio New Zealand's Checkpoint programme on Friday that the sum agreed was not enough.

"Some of us wanted it a bit higher, I wanted the fee to be paid back on behalf of the Auckland ratepayers to be a little higher than it turned out to be."

Mr Quax says if the Auditor-General had conducted the inquiry it would have taken more time, however, the pain would have been drawn out much longer.