Political parties have made their bid for the Maori vote at Waitangi during a largely peaceful day ahead of the commemoration of the signing of the Treaty.

Official celebrations will take place on Thursday where New Zealand's founding document was signed at Waitangi in the Bay of Islands in 1840.

Tight security at the marae ensured that Prime Minister John Key was not impeded, apart from when a man emptied a bucket of dead fish in his path as he left on Wednesday. 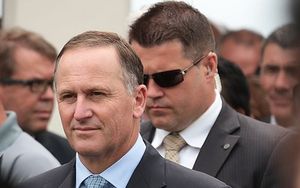 In recent years, Mr Key has been assaulted, shouted down and harangued by big crowds of protesters and said earlier this week that he was expecting trouble.

The Prime Minister was welcomed onto the marae 90 minutes later than planned. Police were joined by waka crews, Maori wardens and security officials who lined the path to the whare (meeting house).

Due to the late arrival, John Key didn't see an anti-oil exploration hikoi of 80 people that had marched from Cape Reinga to Waitangi in protest against Norwegian company Statoil getting a permit to explore for oil in the Reinga basin about 100km off Ninety Mile Beach. The protesters had already been welcomed onto the marae and made no attempt to disrupt the powhiri, or welcome.

However, Mr Key did hear from the hikoi's leader and said protesters have been misled over drilling. Inside the whare, he was challenged about the Government's policy on deep sea mining but rejected criticism of the plan, saying it would help create jobs in Northland.

The protest leader told Mr Key that Northland hapu see mining as a huge risk that can devastate the environment. But Mr Key said the risks were miniscule and the potential benefits for the region are immense.

John Key later told reporters that much of what the leader said was ill-informed or wrong.

"The comments I made in rebuttal were to the leader look, come to Wellington, spend a week with my ministers and their ministries. If at the end of that week you're proved to be right in the assertions you're making, I'll join your protest.

"But if you're proved to be wrong, go out there and tell the protesters, because many of the things he was saying were just simply and utterly not correct. And that's why those people are protesting - because they've effectively got misinformation."

Meanwhile, the Prime Minister said the bucket of fish thrown in his path was no big deal and this year is one of the milder Waitangi receptions he has attended.

"Some guy threw a few pilchards or something on the way out. But bluntly I've been coming for eight years, in a lot of respects this is one of the quietest ones.

"If you think back to a couple of years ago, it took a long time to get on, I've had times where I haven't managed to get a speech up ... I've been belted here - there's been all sorts of things that have gone on. This has got to be at the milder end." 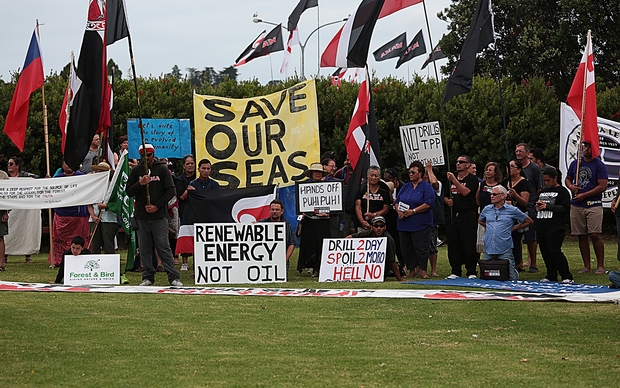 The leader of the Labour Party and the Greens, David Cunliffe and Metiria Turei, spoke later at the marae on Wednesday, urging Maori to vote for their parties to ensure that the Government changes after this year's election.

Mr Cunliffe said the welcome onto the marae was very heart-warming and extremely generous, but thought it strange that his party has not been invited to meet with iwi leaders gathered at Waitangi. 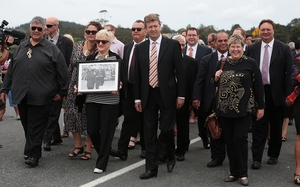 Mr Cunliffe said it was interesting that in an election year, they have not asked to sit down with Labour and talk issues through.

Greens co-leader Metiria Turei said she is well aware of the honour of being the first woman politician to make a speech on the marae on Wednesday.

Mr Turei said she was invited to speak in 2013 but hadn't spoken to kuia - or esteemed elderly women - and didn't say anything then. However, she said she has spoken to kuia since last year and they were happy for her to speak, so she went ahead. 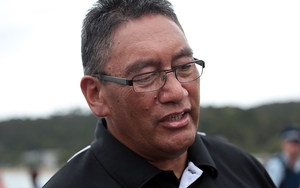 "It's an honour, it was also a little scary to do this as the first Maori woman politician. But our culture is a living culture, and the issues that the Greens are raising are very serious ones. These are the issues our kids, our land, our oceans and how we can protect and sustain them are issues for Maori."

Meanwhile, Mana Party leader Hone Harawira said the powhiri for the Crown went well because everyone was involved and consulted - including the protesters.

Mr Harawira said he stepped aside from a speaking role, so the leader of the anti-drilling protest could address the Prime Minister in the meeting house. He said he'd like to see a little more verve at a powhiri for the Government.

Revitalising te reo Maori, mineral exploration, social housing and education were among the issues iwi leaders meeting near Waitangi wanted to discuss with Prime Minister John Key on Wednesday - the second day of the Iwi Chairs Forum hui in Paihia.

Te Runanga o Te Rarawa's chairperson Haami Piripi said the iwi leaders had been looking at how mineral exploration had been carried out in each of their areas and that was a key issue.

The leaders also endorsed Education Minister Hekia Parata's proposal of kura hourua, or charter schools, and would be asking Mr Key to do more to encourage the use of te reo Maori. Mr Piripi said it would be foolish if Mr Key did not take their views into account.