The Governor-General says protesters at Waitangi have disrespected his role, but not him as an individual.

Sir Jerry Mateparae is denying reports that he was jostled and verbally abused as he entered the marae at Waitangi on Tuesday morning. 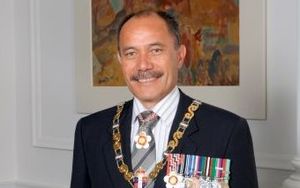 Earlier, Waitangi kaumatua (elder) Kingi Taurua, who was at the Northland marae, said there was yelling and jeering when Sir Jerry arrived and that random hostility to officialdom has unfortunately become the norm.

Mr Taurua said inside the meeting house, Sir Jerry made it clear that he represented the Queen, not the New Zealand Government, and was warmly welcomed by elders.

The Governor-General later told Radio New Zealand's Checkpoint programme there was an element of disrespect as he entered the marae, saying the manner of the protest, including protesters jostling in front of him, was disrespectful.

"There is an element of disrespect - not the individual - but the role and the position. So in that regard, yes there has been disrespect. But in terms of the individual, I'm very comfortable with what has happened here today. I don't feel threatened and indeed if I did, I would've told them."

Prime Minister John Key on Tuesday backed away from his sharp criticism of protesters' behaviour towards the Governor-General, saying it was based on incorrect media reports.

A spokesperson said Mr Key was under the misapprehension that Sir Jerry was involved in a scuffle and there was a shout of "Cut his head off!" The spokesperson said the Prime Minister had no comment to make about whether the verbal abuse constituted disrespect.