Investigations are underway into an incident on a foreign fishing boat which left a fisheries observer with his left arm partially-amputated on Friday. 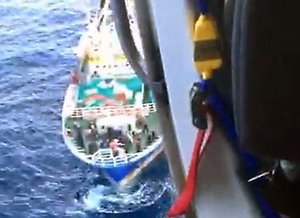 The Otago Regional Rescue Helicopter hovers above the Korean fishing ship as it prepares to winch the New Zealand fisheries observer aboard. Photo: SUPPLIED

Martin Bowers had to be airlifted from a Korean ship off the coast of Bluff in a dangerous helicopter transfer and rushed to Dunedin Hospital.

The Ministry for Primary Industries employee had part of his arm amputated in a conveyor belt and is now in a stable condition in the orthopaedic ward.

In a race to save Mr Bowers' life, the Otago Regional Rescue Helicopter flew in near darkness to pluck him from the ship. Paramedics had to be winched onto the vessel in near-darkness.

"It was late in the evening so we were always going to be fighting daylight, and it's not the type of place where you want to go out to do a winch off a boat when it's dark. So, it was pretty important to get out there in a hurry.

''The sea conditions ... there was quite a swell running, quite a big swell at the time, so the boat was heaving and rolling quite a lot when we got there."

Mr Gale said he flew 180km south of New Zealand to reach the ship - a two-hour return flight. It took about half an hour to winch the man onboard the helicopter, before they flew him to hospital.