The Government is to bring forward a ban on shark finning in New Zealand to October for most species, but it will not include the blue shark until 2016. 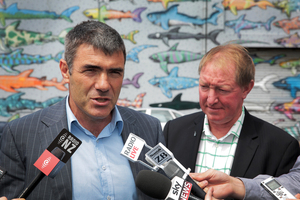 The Government received 45,300 submissions on the National Plan of Action for the Conservation and Management of Sharks announced in November last year. That plan called for all shark finning to be phased out over two years.

Conservation Minister Nick Smith and Minister for Primary Industries Nathan Guy told a news conference on Thursday the first stage of banning shark finning will start from October and a second in 2015.

It will no longer be legal to catch a shark, kill it, remove its fins and dump the carcass at sea.

The finning ban on the migratory blue shark, often caught in longline fisheries, will not start until October 2016.

Nick Smith defended this on Thursday, saying he made the decision after talking with people in the tuna industry.

Dr Smith said they told him that an earlier ban was unrealistic, as fishermen need time to develop ways of unhooking blue sharks on the back of their boats safely and without killing them.

There is also no market for blue shark meat, which Primary Industries Minister Nathan Guy said needs to be further investigated.

Environmental groups, including the Shark Alliance coalition, said two years is too long and blue shark numbers would continue to decline.