The Governor-General has issued his annual New Year's message for 2014, highlighting the role families will play this year, and also marking 100 years since the start of World War I. 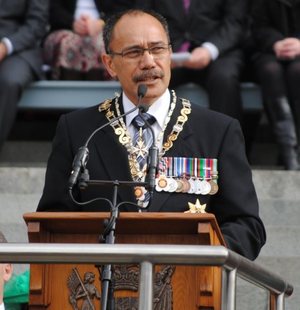 Lieutenant-General Sir Jerry Mateparae said the New Year holidays are a time to enjoy long summer days while reconnecting with family and friends.

He said families will be in the spotlight this year, as the United Nations marks the 20th anniversary of the International Year of the Family.

Sir Jerry said while the structure and dynamic of families in New Zealand has changed, the desire of parents to raise children in a caring and loving environment hasn't.

The care provided to the New Zealand's most vulnerable citizens - children - is a barometer of the well-being of the country's families and society, he said.

While most families successfully cope with the challenges they encounter, some do not, he said, and asked New Zealanders to examine how they can help those families so every child can grow up in a safe and secure home.

The Governor-General also paid tribute to the New Zealanders who fought in World War I and other conflicts to protect the country in the hope their families could live in peace.

Sir Jerry said World War I was a war that ended all peace and unleashed a series of bloody conflicts which enveloped the first half of the 20th century.

The problem of child poverty has been highlighted in several reports and studies in 2013, including in the first annual Child Poverty Monitor published in December by the Children's Commissioner and the University of Otago.

A spokesperson for the Child Poverty Action Group, Susan St John, said it is not just individuals and charities that Sir Jerry is asking to help make change.

"This is election year, so we need to be asking our politicians for large structural changes to policies in income, housing, health and education if we're going to see the progress that the Governor-General is asking for."