The Solicitor-General says whether or not ACT Party leader John Banks knew where thousands of dollars worth of electoral donations came from should be decided by a jury. 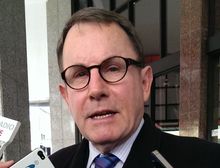 Mr Banks has sought a judicial review of a District Court judge who determined that there was enough evidence for him to face a trial on a charge of making a false electoral return.

The prosecution says donations for John Banks' 2010 Auckland mayoral bid from casino operator SkyCity and internet businessman Kim Dotcom were signed off as anonymous when Mr Banks knew who had made them.

But Mr Banks' lawyer David Jones, QC, told the Auckland High Court on Wednesday that the judge made fundamental errors in his decision based on evidence that was not before the court.

Mr Jones said the judge got everything wrong about where and when Mr Dotcom gave Mr Banks cheques for the failed mayoral campaign.

However, Solicitor-General Mike Heron, QC, said any issues about the evidence should be decided by a jury at trial.

Justice Heath said the issue of filing electoral returns is a cornerstone of democracy and has reserved his decision.

Outside court, John Banks said it would be problematic if he is facing a trial in 2014, an election year. The MP for Epsom maintained that he has done nothing wrong.