A law professor says the Crown is unlikely to retrieve $1.2 million in damages from activists who broke into the Waihopai spy base.

The Court of Appeal ruled Father Peter Murnane, Adrian Leason and Sam Land should pay the Crown the cost of repairing a dome they deflated when they broke into the base in 2008. 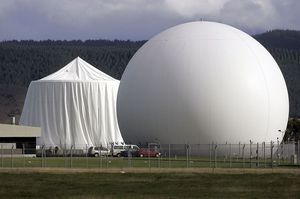 Damage to one of the domes at the Waihopai defence area satellite spy station. Photo: PHOTO NZ / Tim Cuff

In 2010 a jury acquitted the three on criminal charges, but the Crown then took civil action against them.

Auckland University law professor Bill Hodge wonders why the Crown is pursuing the case, since he says none of the men have many assets.

"There really isn't much a creditor can do with respect to a debtor who truly is out of funds. You can't get blood from a turnip, so not that much can be done. So one wonders, what is the ultimate purpose."

Professor Hodge says the Crown has a bona fide case to get the cost of damage to public property.

Peter Murnane, meanwhile, says the men are considering taking their case to the Supreme Court, arguing that if the base is found to be gathering intelligence to facilitate war crimes, the Crown has no legal grounds to pursue costs.

"The centre of our case is, you can't sue people if you're doing great wrong yourself," he says.

The activists say they will decide in the next two weeks whether to seek leave for a further appeal.