The simulation of a Gulf of Mexico-type oil-well blowout off the Taranaki coast predicts crude oil would swamp sensitive estuaries and beaches from Cape Egmont to the Hokianga in the north, including Auckland's western beaches. 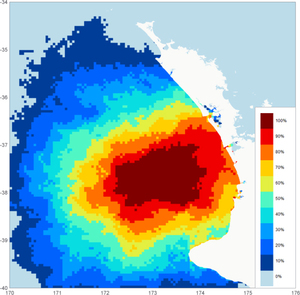 Mr Key says the Government will make sure that any company drilling in New Zealand follows world's best practice.

He says 50,000 wells have been drilled in the Gulf of Mexico since the 1960s and there was only a problem with one - which shows the risk is minuscule. He believes a greater risk to New Zealand will be another ship hitting a reef.

Energy and Resource Minister Simon Bridges is confident with how the industry is regulated and says he is not glib about the risks, as they are exceptionally small.

The computer models were commissioned by Greenpeace, based on drilling plans by Texan oil company Anadarko offshore from Taranaki and Otago this summer.

The models predict that, over 76 days, spilled oil off Taranaki would hit Auckland's Piha and Muriwai beaches hard, but spread much wider.

Off the Otago coast, a test well blowout spill of 10,000 barrels of oil a day would mostly spread away from the coast, across a vast area of ocean to the Chatham Islands.

Greenpeace says the Government and the oil industry are deliberately keeping the public in the dark about the real risks of deepwater drilling.

Greenpeace campaigner Steve Abel says the group released the maps because the Government and the oil industry will not.

The Petroleum Exploration and Production Association says the models are science fiction and the true, worst-case scenario for New Zealand is far less alarming.

Chief executive David Robinson says the maps do not reflect the realities of drilling in New Zealand. He told Radio New Zealand's Morning Report programme the circumstances for a Gulf of Mexico type disaster are not found in this country.

Mr Robinson says test wells off Otago are much more likely to find gas than oil, so that part of the model is also wrong.

"If nobody did anything about it in the very worst of weather conditions, no intervention, yes oil would reach the shore but in nothing like the quantities that are suggested in the Greenpeace scenario," he said.

Oceanologist Willem de Lange, from the Department of Earth and Ocean Science at the University of Waikato, told Nine to Noon the modelling is sound and sensible and the scenario is realistic.

Dr de Lange said, however, that the simulation makes many assumptions, such as not considering what intervention there would be if there was a spill.