The Government has announced an urgent audit of Te Kohanga Reo National Trust Board, the body that oversees publicly funded Maori pre-schools, and a manager has been suspended.

The audit follows allegations of financial mismanagement at the board's commercial division, Te Pataka Ohanga. Senior members of the trust board believe up to $10,000 has been mis-spent.

Maori Television programme Native Affairs revealed this week it had seen statements showing business credit cards were used to buy dresses, fuel and overnight accommodation. More than $120,000 was given out by the trust in unreceipted koha during 2012, it said. 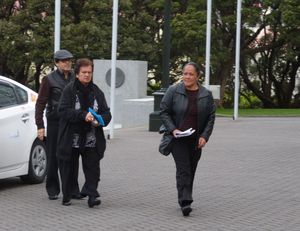 Education Minister Hekia Parata said she expects a report by the end of Wednesday on the terms and conditions of the audit. She said it is important that the allegations do not taint the rest of the kohanga movement.

"It is important to distinguish between babies and bath water here. We've had an allegation of a particular set of incidences around a particular person, and I think it's important that we contain it there, but we also are able to give public confidence about public monies."

In a meeting that went on late into Tuesday night, trustees held talks with the Government, including Ms Parata and Associate Minister Pita Sharples.

Trust member Toni Waho says the trust is taking its own internal action by cancelling all credit cards and is taking steps to bring in an independent director to examine the operations of Te Pataka Ohanga.

Mr Waho says Te Pataka Ohanga general manager Lynda Tawhiwhirangi has been suspended until a separate investigation by the organisation's directors has been completed by the end of this week.

Pita Sharples says it is a depressing chapter in the history of the language nests. He says the kohanga reo themselves are going very well and children are learning and excited. Dr Sharples says he is encouraged by the willingness of the trust and the ministry to straighten things out.

Some Kohanga Reo staff called by Radio New Zealand on Wednesday said the allegations undermine their confidence in the national trust and it is time for major change. But others said they still have faith in the trust and are sure it will deal appropriately with the situation.

Long-standing member of the kohanga reo movement, Peggy Luke-Ngaheke, says she is confident the Kohanga Reo National Trust will deal appropriately with the allegations of financial mismanagement.

She says Ms Tawhiwhirangi has been a diligent soldier of the movement, and she's sure the directors will take action to ensure there won't be a repeat of any misspending.

Ms Luke-Ngaheke says is happy with the national trust's response to the situation.

New Zealand First leader Winston Peters says the Auditor-General would be better placed to carry out an audit of the Kohanga Reo National Trust.

Mr Peters said the Education Ministry should not be involved in the audit. "For if they were doing their job, they would have done it a long time ago."

Mr Peters called for the audit's findings should be made public.